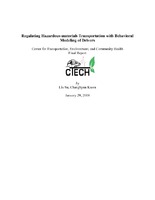 This project considers network regulation problems to minimize the risk of hazmat accidents and potential damages to the environment, while considering bounded rationality of drivers. We consider government interventions such as road pricing, roadbans, and curfews for hazmat traffic and/or regular non-hazmat traffic. Consideration of non-optimal behavioral components such as bounded rationality, satisficing, and perceptionerror of drivers will lead to unique modeling and computational challenges. The proposed multiple-year research is in three phases. In the first phase, we consider a roadban problem for hazmat traffic. While modeling probabilistic route-choice of hazmat carriers by the random utility model (RUM), we consider an averse risk measure called the conditional value-at-risk (CVaR), instead of the widely used expected risk measure. Using RUM and CVaR, we quantify the risk of having hazmat accidents and large consequences, and design the network policy for road bans accordingly. While CVaR has been used in determining a route for hazmat transportation, it has not been considered in the context of route-choice in hazmat network design problems. In the second phase, we consider dual toll pricing approaches for both hazmat and regular traffic with behavioral modeling of drivers. In this context, the hazmat traffic pattern will be described by satisficing path problems and the regular traffic pattern will be described by satisficing user equilibrium problems. In the third phase, we consider a curfew design problem in a time-dependent road network with behavioral modeling. This phase will develop novel modeling and computational methods to consider non-optimal behavior of drivers in a time-dependent road network. The outcomes of this project will contribute to protecting the road network and the environment from undesirable route-choices that may lead to severe consequences of hazmat accidents.