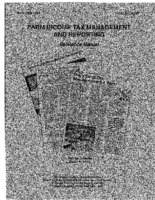 After a long hassle, Congress and the President agreed on a budget and tax package which they claim will reduce the deficit by $40 billion in the current fiscal year and $490 billion over a five-year period. The package includes, in addition to income tax provisions, changes in other taxes and cuts in some programs. Here is our understanding of the major income tax changes that will affect individuals. The top tax bracket will be 31 percent. The bracket will begin at about $78,400 (the beginning of the 33 percent "bubble" in 1990) for joint filers and at $47,050 for single filers. The "33 percent bubble", which was due to the 5 percent surtax to take away the benefit of the 15 percent bracket for higher income taxpayers, is gone. Itemized deductions will be reduced 3 percent of the amount of adjusted gross income over $100,000 (but indexed to inflation). Personal exemptions will be phased out for single filers with taxable incomes over $100,000 and joint filers with incomes over $150,000 (limits would be indexed). The alternative minimum tax rate will increase from 21 to 24 percent. The top rate on capital gain income will be 28 percent. The medicare tax of 1.45 percent, which is now hidden in the social security tax, will be charged on a base as high as $125,000 rather than on just the social security base ($51,300 in 1990).