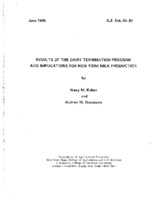 Between February 7 and March 10, 1986, dairy farmers were invited to submit bids to participate in the Dairy Termination Program (DTP), which was authorized by the Food Security Act of 1985.1 If a producer's contract was accepted, the USDA agreed to pay him an amount equal to his bid (on a dollar per hundredweight basis) times his contract base. In return, the farmer agreed to sell his dairy cattle for slaughter or export and to cease milk production for a period of five years. The Congressionally targeted goal of the DTP, or buyout as it is more popularly known, was to remove 12 billion pounds of milk from the nation's supply. The purposes of this report are twofold. The first objective is to summarize the results of the accepted contracts for the DTP in New York. A detailed report of New York contract data by region and county is presented as part of this objective. The second purpose is to analyze the implications of these results in terms of the impact on New York milk production in the near term.