Agricultural District Legislation in New York: As Amended Through August 1983 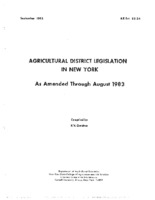 Once again in 1983 the New York State Legislature with the concurrence of Governor Cuomo, enacted additional changes in the Agricultural District Law. Under the provisions of Chapter 146 of the Laws of 1983 (signed by the Governor on May 23, 1983) the chairman of the county soil and water conservation district is an ex officio member of the_ county agricultural district advisory committee. His term of office will be for a term coterminous with his designation as chairman of the county soil and water district's board of directors. A second amendment, Chapter 443 of the Laws of 1983 (signed into law on July 13, 1983), requires the assessor to notify applicants for agricultural use value assessments whether or not their application has been approved or denied and also how the total assessed value is apportioned among the various portions of the property subject to agricultural assessment and those other portions of the property not eligible for agricultural assessment. This notice shall apply to both the tentative assessment roll and the latest final assessment roll. As in the past, applicants for the agricultural assessment should include a self-addressed, prepaid envelope with his application. Chapter 804 of the Laws of 1983 (signed July 30, 1983), the third amendment, provides that landowners who are proposing the creation of a new agricultural district shall indicate whether the original term of the proposed district is for either eight, twelve or twenty years. Districts would be reviewed eight, twelve or twenty years after their creation, depending upon the term specified when they were created. Provision is also made in this Chapter for individual landowners to make a commitment to maintain land exclusively in agricultural production for terms of either eight, twelve or twenty years. Any districts created by the Commissioner of Agriculture and Markets on unique and irreplaceable agricultural lands may have specified terms of either eight, twelve or twenty years (Section 304). Finally, Chapter 866 of the Laws of 1983 (signed August 8, 1983), adds a new definition to Section 301 of the Agricultural District Law. Subdivision six defines oil or gas exploration, development or extraction activities. This amendment is an important supplement to the oil and gas amendment of 1982 which in effect said that oil and gas exploration, development or extraction would not be considered a land use conversion in either agricultural districts (Section 305) or individual commitments (Section 306).