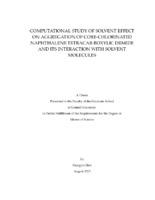 Over the decades, researchers have studied the small-molecule organic semiconductor materials and they have been widely commercialized in applications from cell phone displays to solar cells because of their electronic properties, flexibility and low manufacturing cost. Different from traditional silicon-based semiconductor, charge transport in these organic materials is highly anisotropic because the electron movement is normally localized among π-conjugated carbon atoms. This phenomenon results higher charge transport rate occurring in the plane of π − π bonds. As a result, a slight difference in π − π stacking induced by the molecular packing can significantly change the electron transport in organic materials. Researchers are interested in understanding how to manipulate the synthesis and processing of organic semiconductor crystals and how to control the formation of specific polymorphs with the optimal charge transport properties. One category of organic semiconductor material that has drawn many attentions recently is naphthalene diimide (NDI) and its derivative, core-substituted naphthalene diimide (c-NDI) because of their ability to form n-type field effect transistor. In this thesis, we studied core-chlorinated naphthalene tetracarboxylic diimide (NTCDI). In NTCDI, the hydrogen on naphthalene core is substituted with chlorine atom which have an electron-withdrawing effect to decrease the lowest unoccupied molecular orbital (LUMO) energy level and improve the chemical stability of the crystal by discouraging the interactions with oxidants. In 2016, Loo group at Princeton University successfully synthesized α-phase and β-phase of NTCDI thin film transistor. Most importantly, theyfound out that using post-deposition solvent-vapor annealing technique with different solvents and concentrations can reversibly access both polymorphs. In this work, we used ab initio and molecular dynamics calculations to study how solvent choice (acetone, chloroform, dichloromethane and toluene) affects the NTCDI processing from a microscopic aspect. We found “boat” and “chair” like conformations of NTCDI molecules in solvents that are not yet observed experimentally and used Nudged Elastic Band method to show the high energy barrier which prevents this conformational interchange. Force field paramterization was necessary for the molecular dynamics simulation, largely for the missing dihedrals. We calculated the binding energy between two NTCDI molecules in solvent and determined the tendency of NTCDI aggregation was low in chloroform and dichloromethane, intermediate in acetone and high in toluene. We conducted free energy calculation of the affinity between two NTCDI molecules in solvent to better undertand solvent-NTCDI behaviors from an enthalpic aspect. We also characterized these behaviors in a statistical mechanics manner by calculating the radial distribution functions of NTCDI core to core as well as NTCDI core to solvent. By the end of this thesis, we were able to determine the dominating effects that solvents have on NTCDI moleculess. NTCDI molecules are more likely to aggregate in polar solvents than in non-polar solvents. Although in the binding energy calculation, NTCDI molecules are most likely to aggregate in aromatic solvent such as toluene, our work indicates a more intrigue interaction. Toluene and NTCDI tend to form a sandwich-like complex due to the π stacking from their aromatic cores, which disturbs the aggregation of NTCDI molecules. To sum up, we successfully validated our experimental collaborator’s findings and offered computational insights on how solvent choice controls the NTCDI thinfilm transistor processing.