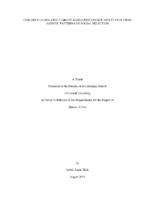 How do children learn about different social groups’ relative status? We tested whether preschool-aged children attend to an agent’s selection of individuals from different groups (i.e., social choices) to infer each group’s relative social status. Participants (N = 160) viewed a sampling procedure in which a puppet repeatedly selected items from one of two groups (blue versus red toy cats). Children were randomly assigned to Social Framing in which the items were described as “friends,” or Object Framing in which the items were described as “toys.” For half of participants in each framing type, the agent’s selected group comprised the majority of items in the box (i.e., 82% of items); and for half of participants, the agent’s selected group comprised a minority of items (i.e., 18% of items). After watching the agent’s selections, participants were asked who the agent would play with among three individuals: one from the selected group, one from the unselected group, or one from a novel group. Only participants that received social framing and witnessed the agent select items from the minority group predicted the agent would again select that group in the future. These participants also predicted that the agent shared food preferences with the selected group, and that an individual from the selected minority group was “the leader.” These results offer a compelling illustration of how children use others’ social choices to infer others’ preferences and reason about status hierarchies, with a preference inferred for numerically smaller groups that are chosen by others.