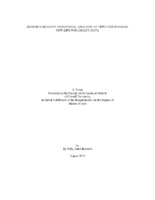 This thesis investigates how a small village on the Deh Luran Plain of Khuzistan, Iran fits within the Uruk world during the Late Chalcolithic in Mesopotamia (3700–3300 BCE). When Tepe Farukhabad was excavated in 1968, a small assemblage of clay accounting devices was recovered. These materials connected the village to the wider culture of Mesopotamia during the fourth millennium BCE. Henry Wright, who excavated the site, positioned Tepe Farukhabad as a small Uruk outpost with administrators overseeing long-distance trade. However, studies that have sourced Uruk period clays have concluded that most devices were made with local clays, changing how we understand administrative devices to have been used and perhaps altering the standard narrative of long-distance trade. This thesis reevaluates the resources put forth as trade items, with an emphasis on animals and their products. I reanalyze the original zooarchaeological data (Redding 1981) and use Wattenmaker and Stein’s (1986) and Wapnish and Hesse’s (1988) models to assess the animal husbandry strategy as a producing, consuming, or a self-sufficient caprine animal economy at Tepe Farukhabad. Additionally, this research reevaluates the faunal material in terms of scale and patterning within architectural spaces during the Uruk phases at Tepe Farukhabad. This reevaluation concludes that exports of meat from Tepe Farukhabad in transregional trade were unlikely; however, secondary products were still possible export items. No clear faunal patterning emerges in the zones outlined that would indicate a closely controlled administrative enterprise. The continued presence of very young and very old caprines reflects a self-sufficient economy and not a producing economy with a well-organized administrative role.