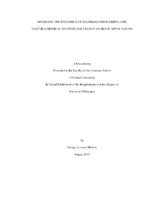 To realize the promise of electric vehicles, personal electronics, and renewable energy sources, improvements in energy storage technology are crucial. However, avenues for improvement such as designing superior electrode materials or modifying the battery electrolyte and separator are difficult without sufficient understanding of the materials and processes used to produce them. One such process is electrospinning, which uses high voltage to produce polymer nanofibers cheaply and continuously. To examine the effect of electrospinning on material morphology, the placement of nanoparticles within lamella-forming polymer blends and block copolymers is simulated using molecular dynamics under planar elongational flow. Then, extensional flow is combined with cylindrical confinement to simulate a block copolymer-filled cylinder with a constantly shrinking diameter, which is a better model for electrospinning. The appearance of ordered or disordered morphologies is found to be connected to a Weissenberg number relating the deformation and self-assembly time scales. A second approach towards understanding energy storage systems is to simulate the battery’s electrochemical performance. Of particular interest is the lithium-sulfur (Li-S) battery, which aims to replace lithium-ion batteries due to its higher specific capacity and cheaper material costs. However, well-known challenges such as polysulfide crossover, large volume changes during cycling, and deposition of insulating lithium sulfide limit the capacity and capacity retention of Li-S batteries. Using a continuum-level numerical simulation which includes reaction, mass transport, adsorption, and nucleation, these challenges are investigated in order to explain the mechanisms underlying Li-S discharge behavior. The model is used to explain the end-of-discharge failure behavior of liquid and gel electrolyte systems, finding that insufficient mass transport of polysulfides is the cause. In addition, the effects of adsorptive materials, cathode passivation with insulating lithium sulfide, and spherical carbon cathode particle geometry is investigated. It is found that adsorptive materials can greatly improve battery performance when the location of lithium sulfide deposition is considered in the model. Finally, the model suggests that different cathode processing techniques in experiment can lead to different end-of-discharge failure mechanisms.