What About Her? Mortuary Practice and Gender Identities at Kanesh 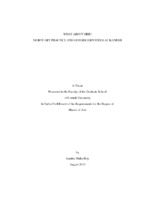 Archaeological studies at the Middle Bronze Age Assyrian trading colony of Kanesh, in the Kayseri Province of modern-day Turkey, have been significantly influenced by historical narratives woven on the basis of the site’s rich corpus of 22,500 cuneiform texts. One social group overlooked by such textually-driven scholarship is women, despite their important role as cultural brokers. This thesis seeks to understand social boundaries, specifically gender identities, at Kanesh through the examination of mortuary practices using insights from third wave feminism. The study reexamines burials and their inclusions through an intersectional framework that considers multiple aspects of a person’s identity (e.g. gender, age, class, ethnicity). A multidimensional story about Kanesh thus emerges that includes those excluded from the cuneiform texts and existing traditions of archaeological scholarship at the site. The predominant groups identified in burials are females and children; these two categories of people, which have not been discussed in prior studies at Kanesh, are revealed to be a vital part of the community. Moreover, this study observes that there are similarities among the items found in graves, the types of burials, and location of the burials of males, females, and children. Based on these similarities, there seems to be a shared economic status as well as similar material culture across the range of ethnicities represented in the karum. As much as the textual evidence drives a narrative focused on Assyrian men, the archaeology of the karum reflects a more diverse yet communal identity.