STRUCTURES, REACTIVITIES, AND MECHANISMS OF SODIUM AND BORON OXAZOLIDINONE-DERIVED ENOLATES 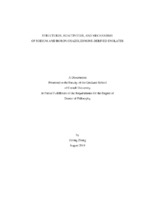 The soft enolization of an acylated oxazolidinone using di-n-butylboron triflate (n-Bu2BOTf) and trialkylamines and subsequent aldol addition was probed structurally and mechanistically using a combination of IR and NMR spectroscopies. None of the species along the reaction coordinate shows a penchant for aggregating. Complexation of the acylated oxazolidinone by n-Bu2BOTf was too rapid to monitor, as was the subsequent enolization with Et3N (triethylamine). The pre-formed n-Bu2BOTf·Et3N complex displaying muted Lewis acidity and affiliated tractable rates reveals a rate- limiting complexation via a transition structure with a complicated counterion. n- Bu2BOTf·i-Bu3N bearing a hindered amine shifts the rate-limiting step to proton transfer. Rate studies show that the aldol addition with isobutyraldehyde occurs as proffered by others. Oxazolidinone-based sodiated enolates (Evans enolates) were generated using sodium diisopropylamide (NaDA) or sodium hexamethyldisilazide (NaHMDS) in the presence of N,N,N′,N′-tetramethylethylenediamine (TMEDA), (R,R)-trans-N,N,N′,N′- tetramethylcyclohexanediamine [(R,R)-TMCDA], or (S,S)-TMCDA. 13C NMR spectroscopic analysis in conjunction with the method of continuous variations (MCV) and density functional theory (DFT) computations revealed the enolates to be octahedral bis-diamine-chelated monomers. Rate and computational studies of an alkylation with allyl bromide implicate a bis-diamine-chelated-monomer-based transition structure. The sodiated Evans enolates form mixed dimers with NaHMDS, NaDA, or sodium 2,6-di- tert-butylphenolate, the reactivities of which are examined. Stereoselective quaternizations, aldol additions, and azaaldol additions of sodiated Evans enolates are described. [2,3]-Sigmatropic rearrangements (Wittig rearrangements) of α-alkoxy oxazolidinone enolates are described. Whereas alkali metal enolates fail owing to facile deacylation, boron enolates generated from di-n-butylboron triflate and triethylamine rearranged in good yields and high selectivities with exceptions noted. IR and NMR spectroscopies show the boron was chelated by the α-alkoxy group rather than the more distal oxazolidinone carbonyl in the complex and enolate. The rearrangement product contained a boron alkoxide that remained unchelated by either carbonyl. Optimization was guided by density functional theory computations suggesting that valine-derived oxazolidinones would be superior to the phenylalanine-derived analogs.