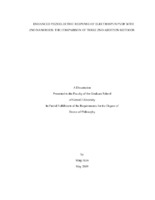 A novel breathable piezoelectric membrane was developed by adding zinc oxide (ZnO) to electrospun polyvinylidene fluoride (PVDF) nanofibers. Notable improvements in the piezoelectric response of PVDF membrane was achieved without compromising the breathability, conformability, or safety of the material. Three ZnO nanorod addition methods were investigated: fillers in electrospinning solution, hydrothermal growth on the fiber surface, and electrospraying on the PVDF membrane surface. Due to its high piezoelectric coefficient values, PVDF is one of the most frequently used piezoelectric polymers. However, its piezoelectric response requires further improvements to use PVDF as high-performance sensors or energy harvesters. Previous studies have identified piezoelectric ceramic and polymer composites with a remarkably improved piezoelectric constant. However, such composites often lack breathability, and some contain piezoelectric ceramics with heavy metals, thus limiting their use in wearable applications. The said limitations can be alleviated by electrospinning piezoelectric polymers into porous membranes and by selecting non-toxic piezoelectric ceramics. Unlike many piezoelectric ceramics containing heavy metals, ZnO is a non-toxic material that has been widely used in many fields and applications, including cosmetics. The fabrication process is simple and economical since it requires no additional poling for PVDF membranes after electrospinning them in a high electric field. The poling direction of PVDF was studied by placing the membrane in a high electric field and observing the membrane’s movements. The electrospun PVDF have dipole alignment both in the fiber-axis direction and membrane thickness direction, as well as a stronger alignment in the fiber-axis direction. A breathable and flexible conductive textile material was explored and compared to an aluminum foil. The conductive material’s mechanical properties, such as breathability and flexibility, indicated that it is a wearable material. Also, its performance as an electrode material was compared to that of aluminum foils and sheets, and the material seems suitable for electrodes.