Words and Doing Things: What Meanings Can Do and the Role of Motivational States in Determining Meaning 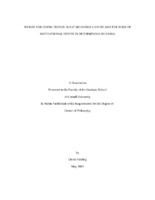 This dissertation consists of three independent papers that are linked by two threads. The first thread is the question of what sorts of explanatory roles can be played by propositions and semantic values. The first paper, “Doing without Minimal Propositions”, explores this question by looking at the role of semantic values in conversation, in particular examining the claim that only a small range of linguistic expressions need context in order for sentences containing them to have a proposition as their semantic content. I argue to the contrary that the largely context-insensitive propositions posited by such a view are not needed to explain the range of linguistic facts that motivates them. My second paper, “Problems for Metasemantic Expressivism”, explores the question of whether the semantic values standardly assigned to normative expressions can help explain the special connection that normative thought and discourse seem to have to non-cognitive mental states: states like desire that play a special role in motivating action. I argue against the metasemantic expressivist attempt to do this, which is a version of expressivism that states that normative expressions have their (standard) semantic values in virtue of expressing non-cognitive mental states. Specifically, I claim that there is no way for an expressivist theory to give a satisfactory explanation of in virtue of what normative predicates have their extensions. My final paper, “Referential Normativity and the Metaphysical Commitments of Normative Realism”, is linked to my second one by the other thread: the question of whether non-cognitive mental states play a central role in grounding the content of normative language and thought. The issue examined in this paper is whether every concept with a certain normative role, which connects uses of that concept to non-cognitive mental states, must refer to the same thing, and if so whether this fact could result in a version of normative realism that does without controversial metaphysical commitments to irreducible normative properties or objects. I argue that the realist motivations that lead theorists to posit this explanatory role for non-cognitive mental states could not be satisfied by a theory that avoids controversial metaphysical commitments.