FUSARIUM GRAMINEARUM AT THE INTERSECTION OF WHEAT AND WILD GRASS COMMUNITIES 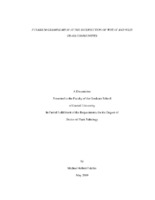 Fusarium graminearum poses a significant challenge to the production of staple cereal crops around the world and causes animal and human health risks by contaminating grain with toxin. Primarily understood as an agricultural pathogen, F. graminearum is also associated with dozens of non-cultivated or wild hosts. The pathogen’s relationship with wild hosts is poorly understood and may have an underestimated influence on epidemiology and evolution. This dissertation broadly examined the population biology and ecology of F. graminearum at the interface of wheat and grass communities. A field survey associated pathogen incidence in grasses with cumulative host density and rainfall. Two distinct Fusarium communities differing in diversity and structure were connected to variation in annual and regional environmental conditions. Fusarium graminearum population structure was characterized using microsatellite markers and loci associated with the production of toxin variants. Three sympatric North American populations were present in New York, but in remote, fragmented host communities, extensive admixture was detected between populations with different toxin production profiles. Wild grasses in non-agricultural settings supported a different balance of populations than was found in wheat fields, and even small pockets of wild hosts provided overwintering sites for a large number of diverse isolates. The competency of six common grasses and wheat were contrasted in controlled experiments, and though several grasses were less suitable than wheat during some stages in the pathogen life cycle, the majority were comparable as hosts. Isolates derived from wheat and grasses were phenotyped for fitness related traits and displayed a difference in mean asexual reproductive traits. Conidia length appeared to be under selection, and evidence of a trade-off with mycelial growth was observed. Cumulatively, these studies implicated regional environmental factors as the driving forces behind the epidemiology, community ecology and population structure of F. graminearum, highlighted the potential for inoculum produced on grasses to contribute to crop infections, and suggested wild grasses may play a greater role in promoting pathogen diversity than previously recognized.