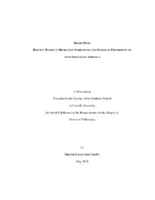 “Kenbe Fem: Haitian Women’s Migration Narratives and Spaces of Freedom in an Anti-Immigrant America” is a study of the impact of forced exodus from Haiti and experiences of anti-Black racism in migration for Haitian women and girls as expressed in narratives of Haitian/Haitian-American women writers. This study demonstrates that writing about coming of age during migratory processes is a genre of literature that captures the diaspora experience and offers a significant way of understanding the nature of women’s migration experiences. Throughout this work, I use the trends, experiences, and themes explored in the texts written by Edwidge Danticat, Roxane Gay, Elsie Augustave, and Ibi Zoboi to deliberate on both the politics of travel for black women and the generative spaces that provide for identity formation, political consciousness-raising, and reimagining of one’s place in the world. I introduce a concept of dyaspora saudade—combining the Brazilian notion of “saudade” with the Haitian conceptualization of “dyaspora.” Dyaspora saudade is that which also nurtures and provides similarly generative spaces where home is lost, found, contested, and restructured and healing is as much a journey as it is the goal. Lastly, I uncover the politics in these works, conceptualize Black feminist citizenship, and offer foundations on which to imagine better experiences for both marginalized migrants and citizens. This dissertation is an understanding of the revolutionary potential of these texts that involves a foundational shift in conceptions of race, womanhood, class, cosmology, and nationhood that immigration due to forced exodus catalyzes. It is an exploration of the science of this literary revolution—a revolution that interpolates Black women authors publishing in diaspora speaking for, against, and through their kindred. The goal of this literary revolution is to affect change. If struggle brings forth the best of human existence, then the stories of Black immigrant women are masterpieces in their exploration of human social issues that are prominent in contemporary societies worldwide. In my work, I endeavor to comprehend, complicate, catalog, and translate their genius.