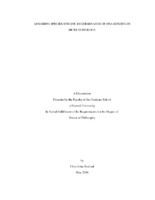 Antibiotic resistance poses a significant threat to human health. The lagging development of new antibiotics and the rapid exchange of resistance genes have created a need for alternative methods to combat emerging ‘superbugs’. One promising strategy involves using lytic phages – bacterial viruses that lyse and kill their hosts, releasing their progeny. Modification-dependent restriction (MDR) systems are innate bacterial defense systems that recognize and degrade phage DNA, thus preventing mature phage production. MDR systems are highly conserved in antibiotic resistant bacteria and several phage-encoded inhibitors have been identified. Understanding the molecular mechanisms of these systems can therefore provide a means to increase the therapeutic potential of phages. McrBC is a two-component MDR system that restricts DNA containing 4-, 5-, or 5-hydroxy-methyl cytosines. The first component, McrB, contains an N-terminal domain that recognizes and binds the modified site and a C-terminal AAA+ motor domain that hydrolyzes GTP and mediates nucleotide-dependent oligomerization. Bioinformatics coupled with a structure of the Escherichia coli McrB suggest that McrB homologs may target different nucleic acids using different molecular mechanisms. To assess the species-specific determinants of McrB DNA-binding, I have purified the putative DNA binding domains of different McrB homologs and determined their atomic resolution structures by x-ray crystallography. The structures of the Thermococcus gammatolerans (Tg) and Staphylothermus marinus McrB N-terminal domains were solved to 1.68 Å and 2.10 Å respectively and revealed structural homology to the PUA-like domains of RNA binding proteins. The structures identified a conserved aromatic cage required for RNA binding via base-flipping of a modified adenosine base. A structure of the TgMcrB in complex with DNA containing 5-methylcytosine confirms this base-flipping mechanism and provides a model for how these proteins bind modified nucleic acids. Furthermore, the structure of the Helicobactor pylori (Hp) LlaJI N-terminal domain was solved to 1.97 Å and revealed structural homology to the B3 family of site-specific DNA binding proteins. LlaJI is a homolog of McrB and functions as a restriction modification (R/M) system that targets DNA site specifically. Together these structures underscore the inherent structural plasticity of McrB DNA binding and provides insights into their molecular mechanisms of target specificity.