A RANDOMIZED CONTROLLED TRIAL OF THE HCHF INTERVENTION: A COMMUNITY-BASED EDUCATION PROGRAM FOR LOW-INCOME PARENTS 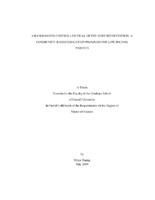 Background: Given the increasing prevalence of childhood obesity, especially among low-income populations, and the importance of parenting in promoting children’s eating behaviors and physical activity, this study aimed to evaluate the effectiveness of Healthy Children, Healthy Families (HCHF) intervention. Methods: This two-year randomized controlled trial used a cross-over design. Parents/caregivers (n=391) of children aged 3-5 years old were recruited and randomized to either immediate education (IE) or delayed education (DE). Participants received eight weekly education workshops and completed surveys at each time points. Only demographic characteristics were analyzed in this study, and the four comparisons (IE vs. DE, year 1 vs. year 2, T1 vs. T4, and English vs. Spanish speaking sites) were conducted. Results: Two hundred and seventy-five parents/caregivers completed surveys at the end of the study. Participants were primarily female, and about two thirds were Hispanic. The majority of them were unemployed, below 185% of poverty, and had low level of education. No important demographic differences were observed between IE and DE groups. Comparison between English and Spanish speaking sites showed significant differences in many variables, including race, ethnicity, household income, poverty level, and education. The other two comparisons (year 1 vs. year 2, T1 vs. T4) only showed a difference in race and household income, respectively. Conclusion: Differences in behavioral outcomes between IE and DE groups will be able to determine the impacts of the education intervention on HCHF participants. Demographic differences between English and Spanish speaking sites might influence the effectiveness of HCHF and therefore, should be used as covariates to control for confounding in future analyses.