The Effect of Virtual Reality on Creativity: Evaluating the Impact of a Nature Environment via Interactive Displays on Creativity 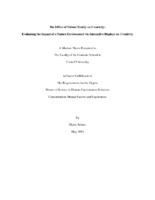 This study explored the impact of an immersive environment on a viewer’s creativity, using Virtual Reality and Head-Mounted Displays (HMDs) as a potential, unexplored resource to cultivate new ideas. As these technologies become increasingly realistic, they offer a potentially cost-effective tool for companies to use to stimulate creative environments at the workplace. In order to appreciate if there is a difference from using an HMD, we need to look at the technology that is currently being used. The current study assessed user creativity viewing a nature scene either on a computer or within an HMD. After the scene was observed, a creativity assessment was given that was comprised of an amalgamation of a Remote Associates Test and an Alternate Uses Test. Once the creativity assessment was completed, users also completed questionnaires to measure individual differences such as processing style, immersive tendencies, and presence. The 98 participants were placed in one of three conditions: one viewed a nature scene on a computer, one viewed a nature scene through an HMD, or a control condition that did not view the video through any medium, which led to a between-subjects design. It was hypothesized that people who viewed the nature scene on a computer would score higher on the creativity assessment than people who were in the control condition and did not view the scene at all. It was also hypothesized that people who viewed the same nature environment on an HMD would score higher on the creativity assessment that people who viewed it on a computer. An assumption was also made that the HMD provides a more immersive VR experience, the HMD group would score higher on the creativity assessment than the computer group. While the original hypotheses of display media and creativity did not yield any significant results, we did find significant relationships between presence and the immersive tendency subfactor focus, as well as presence and object image processing style. Both of these results are potential directions for future research to explore.