Nature's Persistence: Romanticism and the Rhetoric of Implication 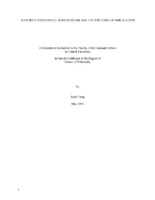 Nature’s Persistence draws upon the rhetorical strategies of Romantic writing to reimagine ecocriticism as also a more historiographically vulnerable epistemic practice. Responding to the tendency to see cast ecocriticism and ecological thinking more broadly as systemic, structural, or network-based approaches, my project argues for an ecocritical sensibility that proceeds through the reconstitution of minute histories. Rereading the works of writers in the British Romantic tradition including William Wordsworth, Jean-Jacques Rousseau, James Hutton, and Percy Shelley, I retrace a process of becoming “contingent” by where “ecological” relations come to be at stake through their entanglement in scenes of “un-learning,” of encountering a “forgetting” that insinuates into what is self-evidently “environmental” in modernity’s history. I argue that Romantic forms of the lyric, autobiography, and didactic poetry and prose consistently reassert perception and its discursive constitution as an issue in quotidian environmental engagement. While much of contemporary eco-theory focuses on questions of internal organization and the reconceptualization agency, often appropriating the “literary” as a vehicle for addressing questions of praxis, my project rearticulates ecocriticism as a provisionally “liberating” process of becoming implicated in the literary, in the lyric, autobiography, and pedagogies and the minute histories they begin to construct. Tracing experiences of the familiar and the didactic, renders seemingly immovable “material conditions” more malleable, more susceptible to reconfiguration. Similarly, while ecocritical engagements with “vulnerability” have been understandably preoccupied with bodies and affect under the neoliberal regime, the authors in this project recast “environmental vulnerability” as itself an epistemic vulnerability to forgetting and its resurfacing.