From Order to Organizing: Rethinking Political Realism and Democratic Theory 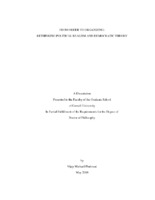 This dissertation is about the relationship between the politics of order and the politics of organizing. In particular, it argues that scholars who have taken order to be the central concept of political thought, a group often called political realists, can and should take up the study of organizing as a way of better understanding what order means in democratic politics. Popular organizing creates political power by way of strategically limited form of disorder within an existing political order. Rather than starting with the question of who the people are, how they are represented by the state, or how claims to peoplehood are made, organizing begins with the question of how existing opportunities for political action can be used to constitute the people as a political subject. Studying popular organizing means studying the ideas, institutions, and practices through which disempowered groups can be create new and empowering forms of collective political agency. I look at how the relationship between political order and political organizing has been theorized by a diverse group of realist thinkers—Thomas Hobbes, Karl Marx, W.E.B. Du Bois, and Saul Alinsky. These thinkers allow us look at how different identities and institutions are used to contest and organize against different kinds of political order. For Hobbes, political order is identical to the sovereign state, and organizing, particularly in religious institutions, is tantamount to rebellion. For Marx, order is not simply political but also economic, and the question of what role the state plays in the capitalist economic order is central to his understanding of what working-class organizing can achieve. Du Bois brings into focus the political order of the United States, which is defined by both capitalism and white supremacy, and he raises the question of how minority organizing against state-sanctioned racial capitalism relates to wider democratic aspirations. Finally, Alinsky’s approach to community organizing, which has been profoundly influential for organizers today, provides us with an agent-centric framework for thinking about how organizing confronts an unjust political order and what we, as political theorists, should take from the study of organizing.