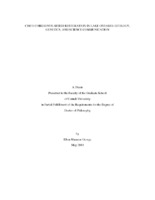 Cisco Coregonus artedi are an important prey fish for many Great Lakes predators, including lake trout Salvelinus namaycush and Atlantic salmon Salmo salar. Their numbers have declined drastically in the last century due to the impacts of invasive species, overfishing, and habitat degradation. However, rehabilitation efforts for cisco have been increasing as interest in restoring native food webs grows across the Great Lakes. This thesis addresses many research questions facing cisco restoration in Lake Ontario, including larval ecology and distribution, spawning behavior, and population genetics. Lake Ontario cisco larvae cannot be reliably distinguished from lake whitefish larvae using traditional visual methods, which complicates early life history studies. Instead, coregonine larvae in Lake Ontario should be identified via genetic barcoding. Cisco larvae were distributed throughout Chaumont Bay during the spring of 2014, and we found no evidence of predation by alewife Alosa pseudoharengus or rainbow smelt Osmerus mordax. Egg mat surveys in several historical spawning locations in eastern Lake Ontario identified two remnant spawning populations that were previously unknown; one in Henderson Harbor, New York, and another near Fox and Grenadier Islands. Population genetics analyses show no genetic structure among Lake Ontario cisco populations. Additionally, we found no evidence of a genetic bottleneck despite historical population declines due to overfishing, and relatively high genetic diversity measures across all sampling locations. We confirmed the presence of several cisco/lake whitefish hybrids from the Bay of Quinte and Chaumont Bay using a three-marker RFLP panel developed during this study. However, the hybridization rate in 2014 larvae from Chaumont Bay was low. Finally, two major science communication efforts using social media are presented in this thesis. We were able to greatly extend the reach of a small coregonine science conference by live streaming video of presentations and posters on Twitter and Periscope. Additionally, a two year social media campaign on Twitter aimed to educate Great Lakes residents about cisco restoration, share scientific findings, and promote public interest in cisco research. Overall, the results presented in this thesis not only go a long way towards our understanding of cisco ecology in Lake Ontario, but also build a foundation of public support for future restoration efforts.