Poison and Disease in Anglo-Saxon Medicine and Metaphor 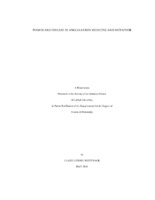 Poison and Disease in Anglo-Saxon Medicine and Metaphor bridges a gap between scholarship on medieval medicine and literary analysis of Anglo-Saxon literature by examining the relationship between beliefs about disease causation in medical recipe-books and the use of extended metaphors of illness in Old English poetry and other non-medical works. Chapter 1 takes a novel approach to identifying beliefs about the causes of disease by analyzing preventive prescriptions in the Old English Herbarium and Medicina de Quadrupedibus, two recipe-books that have traditionally been considered practical rather than theoretical in content. These texts point toward attor or “poison” as a key concept in disease causation. In the next two chapters, my project explores the role of attor and related terms in works of Anglo-Saxon literature that make heavy use of medical metaphor. Chapter 2 performs a detailed study of the Old English poem Guthlac B, examining Saint Guthlac’s physical and spiritual experience of disease and how it relates to the poem’s account of Eve offering Adam a deadly drink in Eden. Drawing on evidence from Chapter 1, I argue that the poem’s two primary representations of death, as a battle and as a poisonous drink, are united by the quality of bitterness. While this quality binds Guthlac’s individual illness to Eve’s cup of death, it also evokes Christ’s bitter drink on the cross. The poem uses these associations to emphasize that the bitterness of physical pain does not have to lead to spiritual embitterment and distance from God. The final chapter examines medical metaphors in the penitentials, using previous scholarship on affective meditation as an interpretive framework. I identify three main categories of medical metaphor in the introductions to penitential manuals and argue that these metaphors, including imagery of poisoning and purgation, provide scripts for the cultivation of emotions crucial in penance. The chapter concludes with an examination of Soul and Body I, an Old English poem involving penitential themes that uses imagery of the corrupted body to encourage a spiritually desirable emotional response. Overall, this project argues for the importance of considering concepts of disease in analysis of Anglo-Saxon literature.