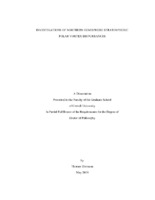 The polar vortex is the dominant dynamic feature of the wintertime polar stratosphere. The defining characteristic of the Northern Hemisphere polar vortex is its interannual and intraseasonal variability caused by global scale atmospheric waves propagating into the stratosphere from the troposphere. This variability is manifest by disturbances which, in this study, are strictly defined and identified in the reanalysis data for the Northern Hemisphere winters from 1981 to 2017. Sixty disturbances are found over the 37 winters by taking geometric moments of Ertel’s potential vorticity and classifying the polar vortex as either undisturbed, displaced off of the pole, or split into two or more vortices. The position of the polar vortex during each disturbance event is averaged and applied to thermodynamic diagnostic quantities in the air column enclosed by the polar vortex. This diagnosis reveals that the location of the disturbed polar vortex experiences, on average, cooling driven by horizontal temperature advection in the lower and middle stratosphere prior to the onset of the disturbance, along with significant residual (likely adiabatic) cooling in the troposphere in the weeks surrounding the onset. The relationship these polar vortex disturbances have with other dynamic phenomena in the stratosphere is also explored, namely: the Aleutian high, the Atlantic high, and the quasi-biennial oscillation. The likelihood of a disturbed day is negatively correlated with the stratospheric quasi-biennial oscillation (positively correlated with its easterly phase). It is also, surprisingly, negatively correlated with the presence of a stratospheric Aleutian anticyclone (the Aleutian high). Finally, a series of experiments were performed using a dry-core idealized general circulation model that contained a stratospheric polar vortex. A topographic and tropospheric eddy temperature wave are added as forcing to the model with varying phase differences between them to see how polar vortex is affected. This revealed that eddy warming (cooling) west of the peak in the topography by 45 latitude is the most (least) optimal configuration for causing a polar vortex disturbance because this increases (decreases) vertically propagating wave activity fluxes in both the upper and lower troposphere.