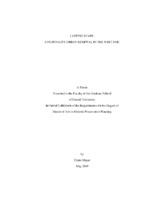 The West End neighborhood of Cincinnati was a thriving community of 25,757 residents when the city decided to move forward with “slum clearance.” This area, rebranded as “Kenyon-Barr” also contained 2,800 residential buildings with 10,295 dwelling units. These residents made up 4.75% of the city’s entire population. Yet when the city of Cincinnati decided to enact urban redevelopment plans based on Title 1 of the Housing Act of 1949, the majority of the neighborhood was demolished for commercial and light industrial uses. The question remains at what cost to the neighborhood’s residents? The demolition of much of the urban fabric of the West End has also demolished the community’s shared identity and connection to the city of Cincinnati. This problem is compounded as the current rapid redevelopment of the nearby Over-the-Rhine neighborhood is beginning to push new residential and commercial development into the small section of what remains of the West End, again leaving residents to wonder if they are living in a vicious cycle in which their loss is always the city’s gain. While “urban renewal” as an agent of change has been analyzed in numerous cities and countries, and in its varying degrees, and styles, Cincinnati has not paid attention to its urban renewal history, and the loss of the historic built environment in the West End. This work documents that story and ultimately shows how engaging in urban renewal in the mid-twentieth century continues to effect planning decisions in the West End of Cincinnati today.