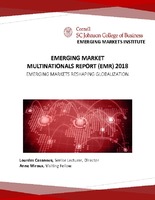 Since the turn of the century, the expansion of enterprises from emerging economies, the so-called emerging market multinationals (eMNCs), has been remarkable. The Emerging Market Multinationals Report (EMR)series, produced by Cornell University, delves into this issue and its broader implications on the global economy. The EMR 2018, by Drs Lourdes Casanova and Anne Miroux, looks at how eMNCs – led by Chinese firms - are continuing their ascension as active global acquirers and pursuers of further brand and product market differentiation. In the report, the authors also examine the implications of the drastic changes in the global economy in the past eighteen months, and explore the growing soft power of emerging economies as illustrated by the launch of initiatives such as the Chinese Belt and Road.