Don’t Breathe on Me 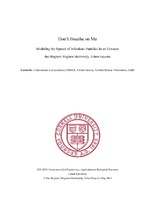 The contamination of surfaces in public spaces is of great importance to minimizing disease spread. When a large number of people share public spaces in close proximity, aerial disease transmission becomes common, especially in enclosed spaces such as small rooms and elevators. An understanding of disease-carrying particle deposition from breathing and airflow is a vital step in determining how to prevent the spread of disease in confined public spaces. Previously, studies have modelled the airflow in larger structures such as airplanes and rooms where the airflow is predetermined due to the presence of central ventilation. These models combine the airflow from vents and human sources to study the deposition of particles on surfaces (Tang et al., 2013; Yan, Li, Shang, & Tu, 2017; Zhao, Zhang, & Li, 2005). Similarly, this model incorporates ventilation and human breathing inside of an elevator to determine final particle spread and deposition. This model will determine what factors determine the spread and deposition of particles in an elevator. For example, this model will test whether the flow of air caused by the vents in the elevator is the dominant factor determining the dispersion of particles, or whether breathing air velocity is more important to particle spread. To test these parameters, a 3D model was developed of a standard elevator with a vent input two feet to the left of the center of the elevator and a vent exhaust two feet to the right of the center which follows the model found in most elevators. Using the ASME standard for elevator ventilation it was determined that the flow of air into and out of the elevator occurs at an equal rate of 5 L/(s*m2) (2105 code). Finally, a sine function was created with an amplitude of 1.3 m/s that modeled the breathing velocity of a human subject inside the elevator based on average breathing velocities found in literature (Tang et al., 2013; Yan et al., 2017). After running the model to solve for the laminar flow fluid dynamics, Lagrangian particle tracking (using Stokes drag law) was simulated for a maximum time period of 500 seconds. Using this initial model, a sensitivity analysis was done by varying the breathing function to simulate shallow and deep breaths as well as varying the location of the person around the elevator. The solution was validated by comparing with data from a study done by Tang. et. al in 2013, as well as with experimental data derived from thermal images of breath propagation. The results indicate that the patterns of propagation throughout time were turbulent in the normal solution, and involved the particles moving toward the vent and then being caught in an eddy-like backflow. The particle trajectories varied significantly from this trajectory as parameters such as the breathing velocity, source position and inlet velocity were changed. This indicates that the location of body within the elevator as well as the velocity of breath have significant impacts on the fluid dynamics within the elevator, as well as the amount of time that the disease particles circulate before coming to rest or flowing out through the vents. When the body position is close to the vent, or the vent velocities are higher, the particles are sucked into the outlet vent faster compared to the control. These results indicate that minimizing particle spread and disease transmission in elevators can be accomplished by designing elevators with higher numbers of vents and higher inlet vent velocities.