Socioeconomic status and the brain: A fuzzy-trace theory approach to address concussion underreporting 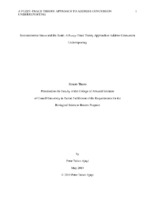 A growing body of evidence suggests that concussions in both adolescents and young adults are often overlooked, underreported, and inadequately treated. Failing to report symptoms associated with a concussion frequently leads to unfavorable health outcomes. The current two-part study aimed to evaluate theoretical predictions about reporting intentions in a heterogeneous sample that includes both athletes and non-athletes. Previous research applying fuzzy-trace theory (FTT) to health decision making suggests that gist-based thinking is protective against risky behaviors and intentions. Furthermore, the growing research highlighting why numeracy is such a stable predictor for effective decision making in various health contexts raises the question as to whether or not numeracy is likely associated with reporting intentions. In Study 1 (n = 902), we applied both FTT and objective numeracy to understand some of the decision-making processes that may promote concussion reporting. Consistent with FTT, analyses indicated that greater numeracy was significantly associated with higher reporting intentions at lower levels of gist processing. Main effects included gist processing and concussion knowledge. In Study 2 (n = 466), we turn our focus to socioeconomic status (SES) to investigate how SES, as indexed by free or reduced lunch status and parental education, may influence risk perception and the protective factors identified in Study 1. Bootstrapping indicated an indirect association between SES and reporting intentions via gist processing, risk perception, and concussion knowledge. Future interventions aimed at reducing concussion underreporting would likely benefit from considering how SES influences health outcomes.