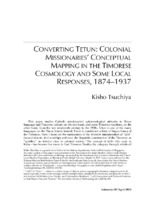 Observers of Timorese culture have long maintained a preoccupation with the term “lulik.” Its meanings have fluctuated in the past 150 years—with prominent associations including “idolatry,” “the sacred,” “prohibited,” “black magic,” and “the core of Timorese culture.” But Timorese have also commonly used the word as an adjective. This paper traces the origin of the bifurcated uses of the word lulik through a reading of missionaries’ efforts to translate Portuguese religious texts into Tetun since the 1870s. In early European missionaries’ ethnographic reports, lulik was identified as Catholicism’s “Other”—and lulik was adopted as the translation of “idolatry” in missionaries’ Tetun texts. However, it was impossible for Europeans to maintain the singular pejorative meaning of lulik, as the Timorese preferred to call Catholic priests nai-lulik (lulik lord). A Timorese collaborator on Bible translation further took advantage of the missionaries’ ignorance of Timorese culture and language: Jesus was called Maromak Oan (the ritual ruler in Wehali) and liurai (the indigenous executive authority), while Caiaphas became the head sacerdote (Port. priest) and Pontius Pilate was called Em-Boot (the title for a Portuguese governor). The upshot was that an attempt to present Catholicism as a European religion failed in Tetun, and translated accounts of Jesus Christ’s final days became the story of an innocent native who was executed by the colonial and religious authorities. The missionaries’ Europe-centric mistranslation of lulik and the Timorese cosmology strongly influenced the way the academic discourse on lulik has developed in the following generations.