Complexity Classes Without Machines: On Complete Languages for UP 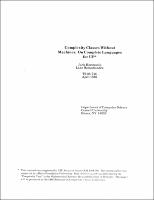