The Magna Charta of Environmental Legislation: A Historical Look at 30 Years of NEPA-Forest Service Litigation 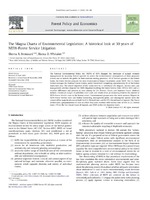 The National Environmental Policy Act (NEPA) of 1970 changed the landscape of natural resource management by requiring federal agencies to assess the environmental consequences of their proposed actions and to include the public in their decision-making processes. Of all federal agencies in the United States, the Forest Service prepares the most Environmental Impact Statements under NEPA. The U.S. Forest Service manages the National Forest System, public forestlands comprising approximately 9% of the United States land area. The overall objectives of this study were to (1) determine the litigants, success rates, and management activities disputed for NEPA litigation involving the Forest Service from 1970 to 2001 and (2) examine differences and patterns in cases among the U.S. District, Circuit, and Supreme Courts. Methods include a historical analysis of published court cases and results show an increasing trend in the number of NEPA-Forest Service cases in the federal courts. Environmental groups were the most common litigants in NEPA-Forest Service cases and timber harvesting, management plans, and endangered species were the subject of the majority of cases in both the U.S. District Court and the U.S. Circuit Court of Appeals. The Forest Service won a preponderance of cases in which they were involved with success rates of 60% in U.S. District Court, 57% in the U.S. Circuit Court of Appeals, and 100% in the U.S. Supreme Court.

Broussard, S.R. and B. Whitaker. 2009. The Magna Charta of Environmental Legislation: A Historical Look at 30 Years of NEPA-Forest Service Litigation. Forest Policy and Economics 11(2): 148-154.