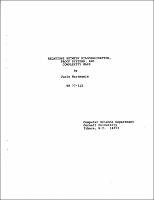 In this paper we study diagonal processes over time-bounded computations of one-tape Turing machines by diagonalizing only over those machines for which there exist formal proofs that they operate in the given time bound. This replaces the traditional "clock" in resource bounded diagonalization by formal proofs about running times and establishes close relations between properties of proof systems and existence of sharp time bounds for one-tape Turing machine complexity classses. These diagonalization methods also show that the Gap Theorem for resource bounded computations can hold only for those complexity classes which differ from the corresponding provable complexity classes. Furthermore, we show that there exist recursive time bounds $T(n)$ such that the class of languages for which we can formally prove the existence of Turing machines which accept them in time $T(n)$ differs form the class of languages accepted by Turing machines for which we can prove formally that they run in time $T(n)$.