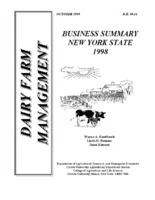 Business and financial records from 305 New York dairy farm businesses are summarized and analyzed. This analysis demonstrates the use of cash accounting and accrual adjustments to measure farm profitability, cash flow, financial performance, and costs of producing milk. Traditional methods of analyzing dairy farm businesses are combined with improved evaluation techniques to show the relationship between good management performance and financial success. The farms in the project averaged 210 cows per farm and 20,900 pounds of milk sold per cow in 1998, which are above the average size and management level of all New York dairy farms. Net farm income excluding appreciation, which is the return to the operator's labor, management, capital, and other unpaid family labor, averaged $132,705 per farm. The rate of return including appreciation to all capital invested in the farm business averaged 11.5 percent in 1998. Differences in profitability between farms continue to widen. The top 10 percent of farms average net farm income excluding appreciation was $558,217, while the lowest 10 percent was a negative $2,216. Rates of return on equity with appreciation ranged from 66 percent to negative 11 percent from the highest 10 percent to the lowest 10 percent of farms. Farms adopting bovine somatotropin (bST) experienced greater increases in milk production, had larger herds and were more profitable than farms not adopting bST. Farms adopting rotational grazing generally produced less milk per cow than non-grazing farms, but had somewhat lower costs of production and higher profitability. However, one should not conclude that adoption of these technologies alone were responsible for differences in performance. Large freestall farms averaged the highest milk output per cow and per worker, the lowest total cost of production and investment per cow, and the greatest returns to labor, management and capital. Farms milking three times a day (3X) were larger, produced more milk per cow and were more profitable than herds milking two times per day (2X). Operating cost per cwt. of milk was $0.31/cwt. higher for 3X than 2X milking herds.