Replication and Fault-Tolerance in the ISIS System 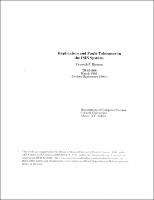 The ISIS system transforms abstract type specifications into fault-tolerant distributed implementations while insulating users from the mechanisms used to achieve fault-tolerance. This paper discusses techniques for obtaining a fault-tolerant implementation from a non-distributed specification and for achieving improved performance by concurrently updating replicated data. The system itself is based on a small set of communication primitives, which are interesting because they achieve high levels of concurrency while respecting higher level ordering requirements. The performance of distributed fault-tolerant services running on this initial version of ISIS is found to be nearly as good as that of non-distributed, fault-intolerant ones.