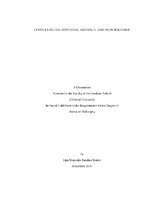 This dissertation is focused on studies of synthesis, assembly and flow behavior of complex liquids (colloids). The flow behavior of a mixture of magnetite Fe3O4 nanoparticles (NPs) and polyethylene oxide was studied. The mixture flow behavior was studied under the application of static and oscillating magnetic fields. An increase in the viscosity of the samples under static applied field was observed and, furthermore, the decrease in the viscosity, known as a “negative viscosity effect”, was also revealed when specific oscillating magnetic fields were applied. Grazing incidence wide angle x-ray scattering (GIWAXS) was used to study the induced assembly of cellulose nanocrystals (CNC) as they experience shear forces during film-casting process. The GIWAXS experiments were performed in situ and in real time, and, as the films of CNC were cast, GIWAXS patterns were recorded at regular time intervals. The influence of solution concentration, shear-cast velocity and drying temperature on the ordering of cellulose nanocrystals (CNC) was presented. By using a simple analytical model to relate the GIWAXS data to the chain orientational distribution, we fit our data to obtain the average CNC orientational order parameter (S). In a different experiment, the flow-induced orientation of CNC suspensions, pure and loaded with Fe3O4 nanoparticles, were studied using a custom-built flow cell. Transmission wide-angle X-ray scattering (WAXS) was used to quantify the degree and direction of CNC orientation of the suspensions, under Poiseuille flow. For the binary mixtures of CNC/Fe3O4 NPs, different CNC orientation patterns were observed: isotropic, along the direction of flow, and biaxial orientation. A simple analytical model to relate the WAXS data with CNC orientational order was employed. The synthesis of alpha manganese dioxide (α-MnO2) nanorods was performed using natural extracts from Vitis vinifera grape stems and Malus domestica ‘Cortland’ apple peels. A two-step method to produce highly crystalline α-MnO2 nanorods was used: (1) reduction of KMnO4 in the presence of natural extracts to initiate the nucleation process; and (2) a thermal treatment to enable further solid-state growth of the nuclei. The catalytic activity of the nanorods in the degradation of aqueous solutions of indigo carmine dye was also evaluated.