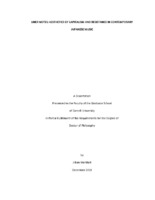 This dissertation hypothesizes that capitalism can be understood as an aesthetic through an examination and comparison of three music life worlds in contemporary Japan: traditional, popular, and underground. Through ethnographic fieldwork-based immersion in each musical world for nearly four years, the research presented here concludes that capitalism’s alienating aesthetic is naturally counteracted by aesthetics of community-based resistance, which blur and re-organize the generic boundaries typically associated with these three musics. By conceptualizing capitalism -- and socio-economics on whole – as an aesthetic, this dissertation ultimately claims an activist stance, showing by way of these rather dramatic case studies the self-destructive nature of capitalistic enterprise, and its effects on musical styles and performance, as well as community and identity in Japan and beyond.