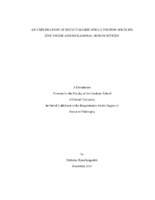 Isolated point defects in wide bandgap semiconductors are single photon sources with applications in quantum optics, precision sensing, and quantum information processing technologies. Although the nitrogen-vacancy center in diamond has historically garnered the most attention, efforts to discover novel single photon sources have uncovered candidates in SiC, GaN, WSe2, WS2, ZnO, and hexagonal boron nitride (h-BN). In this thesis we focus our attention on single photon emission from defect in ZnO and h-BN. In the case of ZnO, the single-photon emission is in the range of 560 – 720 nm and typically exhibits two broad spectral peaks separated by ~150 meV. We observe discrete jumps in the fluorescence intensity between a bright state and a dark state and identify two varieties of dark state. Polarization measurements reveal the presence of a single absorption and emission dipole aligned parallel to one another. Point group theory indicates that the optical transitions investigated involve orbital singlets. In the case of h-BN, the single-photon emission typically includes a sharp zero-phonon line (ZPL) with a phonon sideband red-shifted by ~165 meV. The ZPL energy varies strongly from defect-to-defect and is distributed across an energy range in excess of 500 meV. We study the temperature-dependent linewidth, spectral energy shift, and intensity for two different ZPLs centered at 575 nm and 682 nm. These results are well described by a lattice vibration model that considers piezoelectric coupling to in-plane acoustic phonons. Lastly, we investigate the polarization selection rules and compare our findings with the predictions of the Huang-Rhys model. Our survey reveals that a two-level Huang-Rhys model succeeds at describing excitations mediated by the creation of one in-plane optical phonon but fails at describing excitations that require the creation of multiple phonons. We propose that direct excitations requiring the creation of multiple phonons are inefficient due to the low Huang-Rhys factors in h-BN and that these ZPLs are instead excited indirectly via an intermediate electronic state. This hypothesis is corroborated by polarization measurements of an individual ZPL excited with two distinct wavelengths that indicate a single ZPL may be excited by multiple mechanisms.