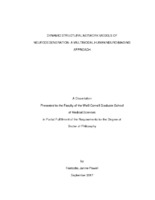 Neurodegenerative diseases are a major cause of disability and premature death worldwide (Brettschneider et al. 2015). The prevalence of neurodegenerative disorders is increasing rapidly while disease-modifying therapies remain missing (Palop et al. 2006). Hence, understanding how neurodegenerative pathology spreads throughout the brain is integral to prevention and/or the discovery of disease-modifying therapies. Hallmark patterns of disease are well-characterized from converging animal model, post mortem and human neuroimaging evidence. However, predictive whole-brain models of neurodegeneration are much less studied. This thesis utilizes complex graph theoretic methodology and multimodal human neuroimaging data to construct and evaluate predictive models of disease spread in several debilitating disorders, including Alzheimer’s Disease, Huntington’s Disease and Schizophrenia. By probing the two dimensions of network neuroscience (dynamics on networks vs. dynamics of networks), the current work seeks to elucidate mechanisms of neurodegeneration. Chapter one gives biological background to the two dimensions of network neuroscience and current hypotheses of neurodegeneration in Alzheimer’s Disease (AD), Huntington’s Disease (HD) and Schizophrenia (SZ). Chapter two asks if Alzheimer’s Disease is a disorder encompassing dynamics on networks or dynamics of networks by using a predictive pathology spread model to assess whether the structural network undergoes degeneration or remains intact to simply serve as a conduit for degenerative pathology in AD. Chapter three expands on work presented in Chapter two by elucidating mechanisms at play atop the static structural network to determine the relationship between rate of neurodegeneration and CSF biomarkers. Chapter four focuses purely on dynamics on networks by constructing several models of pathology spread in Huntington’s Disease in an unprecedented dataset and is the first work to empirically evaluate predictive ability of popular neurodegenerative hypotheses in vivo. Chapter five analyzes dynamics of networks by exploring age-related organizational changes in the WM network and the relationship to gene expression in chronic schizophrenia. Together, these distinct studies elucidate the role of structural network organization in the dynamics of neurodegeneration and suggest an umbrella approach to modeling pathology spread. Chapter six integrates findings across all three original studies and discusses the therapeutic implications of the current thesis, methodological considerations and future work.