Egfl7 Signaling During Organogenesis Of Endocrine Organs: The Pancreas And Placenta 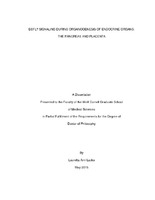 Endocrine organs play a critical role in physiology, growth, and metabolism through secretion of hormones. For example, the hypothalamus controls production of hormones from the pituitary gland to regulate homeostasis, the pancreas produces insulin and glucagon to control blood glucose levels, and the placenta produces hormones necessary for the establishment and maintenance of pregnancy. These organs require a vascular network for hormone secretion in addition to supplying oxygen and nutrients and removing metabolic wastes. Epidermal growth factor like domain 7 (Egfl7) is a secreted angiogenic factor important for vascular development. In this thesis, I have analyzed a role for Egfl7 in the development of two endocrine organs, the pancreas and placenta. The first set of studies elucidates a role for Egfl7 in pancreatic development. Endothelial specific overexpression of Egfl7 using a transgenic mouse model resulted in increased pancreatic progenitor cell proliferation and decreased differentiation toward insulin-positive endocrine cells. These results were concomitant with collaborative studies demonstrating the stage dependent role of EGFL7 in maintaining pancreatic progenitor self-renewal during directed differentiation of human embryonic stem cells (hESC) along the pancreatic cell lineage, a promising protocol to treat pancreas-associated disorders. The second set of studies elucidates a role for Egfl7 in normal and pathological placental development. Analysis of pathological placentation revealed that Egfl7 is downregulated in human preeclamptic term placentas, and in placentas of a mouse model of preeclampsia (PE), prior to the onset of clinical signs of the disease. In addition to placental endothelial cells, Egfl7 expression was uncovered in the trophoblast cell lineage. Analysis of Egfl7 loss-of-function placentas demonstrated a critical role for Egfl7 in patterning of the fetoplacental vasculature, resulting in reduced placental perfusion. Collectively, these studies have elucidated novel roles for Egfl7 during organogenesis of the pancreas and placenta. The stage dependent role of EGFL7 in hESC differentiation may enhance strategies used for treatment of diabetes mellitus, the seventh leading cause of death in the United States. The functional role of Egfl7 in placental development and its early downregulation in PE suggest that it could be a potential novel diagnostic tool and/or therapeutic target for treating PE.