Use Of Electronic Health Records To Aid In Pediatric Obesity Diagnosis 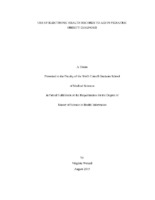 Background: Obesity has recently been classified by the American Medical Association (AMA) as a disease which, if unrecognized and unaddressed in childhood, causes multiple medical and psychological complications that can impact both personal and population health. Unprecedented funding is being invested in electronic health records to improve quality, safety, and delivery of healthcare and reduce healthcare costs. Scant literature has evaluated the use of aids in the electronic health record (EHR) to identify obesity. Objectives: The purpose of this study was to determine to what extent the tools available in an EHR for automatic Body Mass Index (BMI) calculation based on height and weight documentation are used by pediatricians to correctly identify obesity in children. Secondary objectives were to evaluate quality of data input (discrete vs. free text) and see if there is any variation in rates of identification among patients of different socio-demographic characteristics and trainees of different levels. Methods: We conducted a retrospective chart review for patients aged 2–18 years seen for a well-child visit at New York Presbyterian Hospital between January 2011 and January 2014, where it is standard practice at these visits to take height and weight measurements. The EHR automatically populates these values onto growth curves, converting them into BMI with percentiles. Standardized definitions from the Centers for Disease Control and Prevention (CDC) 2010 were used to qualify overweight and obese based on BMI. We determined the percentage of patients who were overweight or obese (based on CDC percentiles) that had the diagnosis identified by the pediatrician, and then assessed the quality of data input. We assessed laboratory follow up and referrals for all patients, and assessed for demographic differences among patients properly and not properly documented by providers as obese or overweight. Results: We reviewed 700 charts in total. Inclusion criteria were all of the patients who had a BMI between 85–95% (these were grouped as overweight) and a BMI over 95% (obese). 209 patients were overweight or obese and therefore eligible for inclusion. Of the 209 clinically overweight/obese children, 72.2% had some form of documentation of this diagnosis, although the diagnosis was documented more often in the obese vs. overweight child. The diagnosis was most often captured electronically in the free text progress note. Over half of clinically overweight/obese children aged ?8 years did not receive follow-up standard laboratory testing, and only about one-quarter of clinically overweight/obese children had documented in-office nutrition guidance. Diagnosis of overweight was higher in females, but it was almost twice as likely that an obese male would be documented as such. Results showed no identification variation based on age or race/ethnicity. There was no difference in recognition of obesity/overweight based on postgraduate year (PGY) or nurse practitioner (NP) status. Conclusion: Despite its importance as a public health priority for children, automatic calculation of BMI by use of an EHR led to documentation by a provider as a child being overweight/obese only three quarters of the time. This study suggests that despite increasing focus on using EHRs to improve individual and population health, including for obesity, clinical decision support remains underutilized.