Pictures and Trails: A New Framework for the Computation of Shape and Motion from Perspective Image Sequences 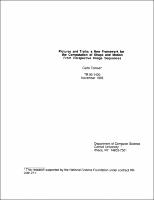 This report presents a new framework for the computation of shape and motion from a sequence of images taken under perspective projection. The framework is based on two abstractions, the picture and trail loci, that represent respectively the set of all pictures of the same scene and the set of all trails that a point in the world can leave on the image for a given camera trajectory. These abstractions lead to a remarkably clean relation between perspective and orthography. Furthermore, image motion is described in terms of angles between projection rays, thereby eliminating the need to model camera rotation and leading to more stable results. A numerically sound, global minimization method is developed, based on this framework, for the case of a two-dimensional world, but all concepts also hold in three dimensions. Experiments show that the method is rather immune to noise but critically dependent on camera calibration.