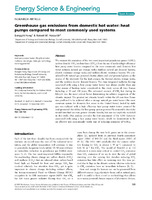 We estimate the emissions of the two most important greenhouse gasses (GHG), carbon dioxide (CO2) and methane (CH4), from the use of modern high-efficiency heat pump water heaters compared to the most commonly used domestic hot water systems: natural gas storage tanks, tankless natural gas demand heaters, electric resistance storage tanks, and tankless electric resistance heaters. We considered both natural gas-powered electric plants and coal-powered plants as the source of the electricity for the heat pumps, the thermal electric storage tanks, and the tankless electric demand heaters. The time-integrated radiative forcing associated with using a heat pump water heater was always smaller than any other means of heating water considered in this study across all time frames including at 20 and 100 years. The estimated amount of CH4 lost during its lifecycle was the most critical factor determining the relative magnitude of the climatic impact. The greatest net climatic benefit within the 20-year time frame was predicted to be achieved when a storage natural gas water heater (the most common system for domestic hot water in the United States) fueled by shale gas was replaced with a high efficiency heat pump water heater powered by coal-generated electricity; the heat pump system powered by renewable electricity would have had an even greater climatic benefit, but was not explicitly modeled in this study. Our analysis provides the first assessment of the GHG footprint associated with using a heat pump water heater, which we demonstrate to be an effective and economically viable way of reducing emissions of GHGs.