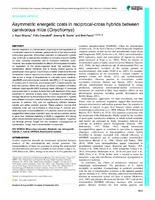 Aerobic respiration is a fundamental physiological trait dependent on coordinated interactions between gene products of the mitochondrial and nuclear genomes. Mitonuclear mismatch in interspecific hybrids may contribute to reproductive isolation by inducing reduced viability (or even complete inviability) due to increased metabolic costs. However, few studies have tested for effects of mitonuclear mismatch on respiration at the whole-organism level. We explored how hybridization affects metabolic rate in closely related species of grasshopper mice (genus Onychomys) to better understand the role of metabolic costs in reproductive isolation. We measured metabolic rate across a range of temperatures to calculate basal metabolic rate (BMR) and cold-induced metabolic rate (MRc) in O. leucogaster, O. torridus and O. arenicola, and in reciprocal F1 hybrids between the latter two species. Within the genus, we found a negative correlation between mass-specific BMR and body mass. Although O. arenicola was smaller than O. torridus, hybrids from both directions of the cross resembled O. arenicola in body mass. In contrast, hybrid BMR was strongly influenced by the direction of the cross: reciprocal F1 hybrids were different from each other but indistinguishable from the maternal species. In addition, MRc was not significantly different between hybrids and either parental species. These patterns indicate that metabolic costs are not increased in Onychomys F1 hybrids and, while exposure of incompatibilities in F2 hybrids cannot be ruled out, suggest that mitonuclear mismatch does not act as a primary barrier to gene flow. Maternal matching of BMR is suggestive of a strong effect of mitochondrial genotype on metabolism in hybrids. Together, our findings provide insight into the metabolic consequences of hybridization, a topic that is understudied in mammals.

The Company of Biologists Ltd.