On the Computational Complexity of Scheme Equivalence 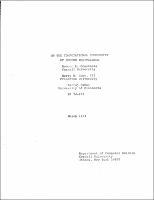