The LBA Problem and its Importance in the Theory of Computing 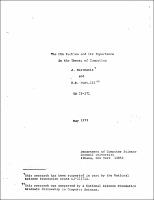