The Efficient Calculation of Powers of Polynomials 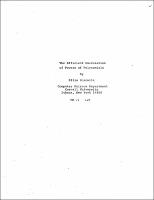 Suppose we are given a polynomial $P(x_{1},\ldots,x_{r})$ in $r \geq 1$ variables, let $m$ bound the degree of $P$ in all variables $x_{i}, l \leq i \leq r$, and we wish to raise $P$ to the $n^{th}$ power, $n>1$. In a recent paper which compared the iterative versus the binary method it was shown that their respective computing times were $O(m^{2r}n^{r+1})$ versus $O((mn)^{2r})$ when using single precision arithmetic. In this paper a new algorithm is given whose computing time is shown to be $O((mn)^{r+1)$. Also if we allow for polynomials with multiprecision integer coefficients, the new algorithm presented here will be faster by a factor of $m^{r-1}n^{r}$ over the binary method and faster by a factor of $m^{r-1}$ over the iterative method. Extensive empirical studies of all three methods show that this new algorithm will be superior for polynomials of even relatively small degree, thus guaranteeing a practical as well as a useful result.