Local vs Global: Place-based Framing in the Environmental Politics of Philadelphia 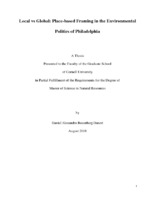 Cities can serve as powerful centers of meaning for the construction of place-based identities. How do these identities figure into discourse around environmental issues? Research on discursive framing and identity has thus far focused on identity constructs such as race, class, gender, and ethnicity. Through a mixed methods analysis of several data sources including transcripts of Philadelphia City Council meetings from 2007 to 2017, I analyze how policy-makers, local environmental groups, and national/regional environmental groups employ place-based framing to define, explain, and propose solutions to environmental problems. I contrast place-based frames with "global" frames that center arguments for policy change on the national or global implications of environmental problems such as climate change and deforestation. My results reveal that place-based framing is a dominant mode of discourse in Philadelphia environmental policy discussions and that actors may employ frames strategically so as to appeal to place-based identities and further political goals.