Authoritarian Politics and Environmental Activism in Russia and China 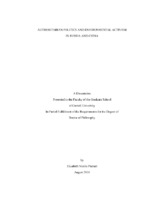 Why do state-society relations under authoritarianism vary so widely from repression to cooperation to neglect? Why are some groups within civil society able to enter into cooperative relationships with state actors, while others are repressed or ignored? Using the example of environmental activism in Russia and China, I gain leverage on these questions by examining four tactics that activists use to interact with the state – leveraging international influence, engaging in mass mobilization, seeking justice through the legal system, and participating in formal and informal relationships with policymakers. Despite China’s more closed authoritarian system, I find that Chinese environmental groups have greater access to policymakers and are more able to contribute to governance. While in Russia, environmental groups are mostly excluded from governance and often specifically repressed. I argue that this can be explained by considering each state’s different approach to the dilemma of information and control and how that is shaped by differences in political structure, the regime’s basis of power, and major historical traumas. Evidence is drawn from over 13 months of fieldwork and more than 140 interviews with relevant actors in Russia and China.