Determination of the Oxygen Permeability of Metal Oxide Thin Films 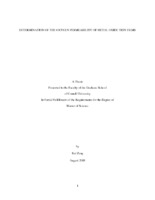