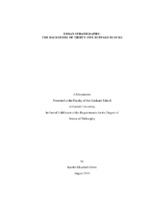 Three miles east of downtown Buffalo, NY, the Broadway-Fillmore neighborhood was the historic epicenter of the city’s Polish community starting in the 1880s. Using case studies, the following work investigates the natural and architectural history of one corner of the neighborhood, recognized in the early 20th century as the parish of Corpus Christi Roman Catholic Church. Once one of the city’s densest areas, the neighborhood experienced a precipitous physical and demographic decline in the mid-20th century. Vacant lots and dilapidated residences now characterize the space, interspersed between three iconic structures: the Central Terminal, Corpus Christi R.C., and the Broadway Market. The crux of the project revolves around exploring how the Broadway-Fillmore corridor transformed from the heart of a vibrant, largely working class community into its current, struggling, diminished physical state. This central inquiry spawned a number of related questions. What specifically occurred in the neighborhood—what decisions were made, what strategies were employed, what issues ignored or debated—that exacerbated its decline? How did the character of the land itself, now compressed under cracked asphalt and the intermittent foundation, affect human usage? What can the histories of three anchor complexes teach us about the impacts of decisions on the neighborhood’s built and natural spaces? How did external mid-century urban planning decisions intensify neighborhood challenges? Finally, what role should nostalgia play in neighborhood advocacy, how does the literature on historic preservation address it, and how can preservation narratives be used to encourage culturally inclusive histories? A micro-history of a working class neighborhood in an American post-industrial city, this work demonstrates that history is not a linear process. Instead, it is formed in layers. Events—geological, ecological, environmental, sociological—compile over time and are manifest in the natural and built landscapes. Careful analysis can contribute to nuanced historic narratives that promote inclusivity within urban and historic preservation planning.