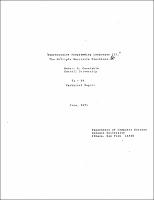 The characterization of program structure is an elusive aspect of the theory of programming languages. Contingent on such a characterization is an interesting study of the trade-off relationships between program structure and efficiency, between structure and intelligibility, between structure and size, and so forth. One promising definition of program structure is suggested by the studies of the structure of recursion schemata pursued by logicians in the 1930's. In this paper we carry over some of these ideas to programming and present new computer-oriented definitions of certain well-known classes of recursive functions, namely the multiple recursive,$\Re^{n}$ , function of Peter. The treatment will facilitate discussions of ultra-complex functions when the need arises. Surprisingly, the need to discuss them does arise frequently at least for doubly recursive function when teaching results about primitive recursive functions and the various languages for computing them. Students want examples of non-primitive recursive functions and computations. Theoreticians also want simple examples of functions which have high structural as well as computational complexity. $\Re^{2}$ functions and the languages given here serve these purposes.