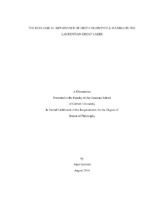 Deep chlorophyll maxima (DCM) are common in stratified lakes and oceans, and phytoplankton growth in DCM can contribute significantly to total ecosystem production. Understanding the drivers of DCM formation is important for interpreting their ecological importance. The overall objective of this research was to assess the food web implications of DCM across a productivity gradient, using the Laurentian Great Lakes as a case study. First, I investigated the driving mechanisms of DCM formation and dissipation in Lake Ontario during April–September 2013 using in situ profile data and phytoplankton community structure. Results indicate that in situ growth was important for DCM formation in early- to mid-summer but settling and photoadaptation contributed to maintenance of the DCM late in the stratified season. Second, I expanded my analysis to all five of the Great Lakes using a time series generated by the US Environmental Protection Agency (EPA) long-term monitoring program in August from 1996-2017. The cross-lake comparison showed that DCM were closely aligned with deep biomass maxima (DBM) and dissolved oxygen saturation maxima (DOmax) in meso-oligotrophic waters (eastern Lake Erie and Lake Ontario), suggesting that DCM are productive features. In oligotrophic to ultra-oligotrophic waters (Lakes Michigan, Huron, Superior), however, DCM were deeper than the DBM and DOmax, indicating that photoadaptation was of considerable importance. Across lakes, euphotic depth was a significant predictor of both DCM depth and chlorophyll concentration, with greater water clarity associated with deeper and weaker DCM. Lastly, I investigated how DCM formation affects zooplankton diel vertical migration (DVM) by comparing the diel movements of different zooplankton size groups across three transects in southern Lake Michigan during summer 2015. Using taxonomy data from stratified net tows to inform our interpretation of laser optical plankton (LOPC) data, I concluded that phytoplankton distributions are an important determinant of zooplankton weighted mean depth. Trade-offs between optimal temperature, access to food resources, and predator avoidance contributed to differences in DVM among zooplankton size groups and regions of the lake. Overall, DCM production likely contributes significantly to phytoplankton biomass in oligotrophic lakes, causing selection pressure toward cold-adapted zooplankton that can effectively utilize DCM resources.